Free Worldwide Shipping on All Orders!

After Apple unveiled iOS version 13 on Monday, hundreds of millions of iPhone users are looking forward to getting their devices up to speed with the latest features, including the long-awaited dark mode. As opposed to last year, when Apple iOS Version 12 was supported by all devices that also ran iOS 11, some users will be disappointed when Apple releases iOS Version 13 to the public in September, however.

Contrary to earlier rumors, iOS 13 will still be supported by the iPhone SE, but anyone still using an iPhone 5s, 6 or 6 Plus will be left behind. Considering that the iPhone 5s was released in 2013, users can’t really complain about a lack of support though. Falling behind the curve after six years is something that many Android users can only dream of.

The following chart shows how long Apple has historically supported different iPhone models with the latest versions of its mobile operating system. iOS 13 will be supported by all iPhones from the 2015 iPhone 6s and 6s Plus onwards. 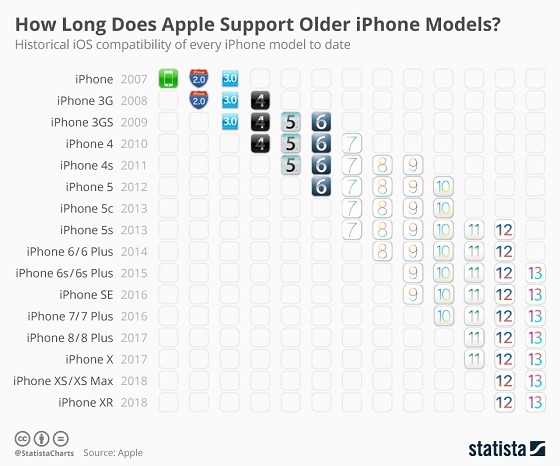